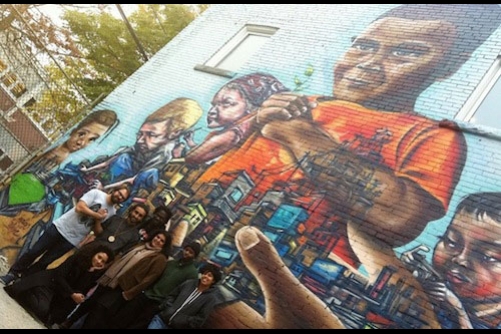 TORONTO.   Bulwer Street is a surreal passageway in Toronto located behind Queen Street West, which is home to one of the most vibrant youth communities in Canada.  At one end of the street near Soho Street, there are a few pleasant  row houses, but most of the street is bounded by the fenced-off concrete barriers of an inner city schoolyard on the north side and piles of garbage and debris from the bar and restaurant backdoors on the south side.  Go west young one and you will discover a series of silent, abandoned-looking buildings. Rumour goes that the Weeknd recorded part of House of Balloons in a studio ensconced behind one of the tagged up doors.

Not too long ago, 37 Bulwer was a shooting gallery for local drug addicts.  In the summer of 2011, the building was lovingly restored by a businesswoman with a vision to transform the area.  The lady’s vision was brought to life with a lease of the entire building to Manifesto Community Projects.  Since late August, the building has been headquarters to the five-year-old non-profit organization that hosts the Manifesto Festival of Community and Culture – a massive annual free outdoor hip-hop show sustained primarily by a huge number of volunteers!

Manifesto Community Projects commissioned a giant mural of seven-panel Rubix Cubed portrait of Canadian hip-hop icons for the building’s new façade.  Che Kothari, Executive Director of Manifesto Community Projects, explains that the building represents a public, youth-focused, community-based hub of arts and music projects: “The key here is to create opportunities so that youth are engaged in the community.”  In reference to the west-facing mural on the building’s exterior, painted by local artists Elicser and Indigo, Kothari notes that “It’s beautiful, but in six months we plan to refresh it with another mural,” he says, announcing the organization is working with Councilor Adam Vaughan to extend art along the street. “We want Bulwer to be known around the world for its art and we want this building, like the organization, to be a living, breathing thing.”