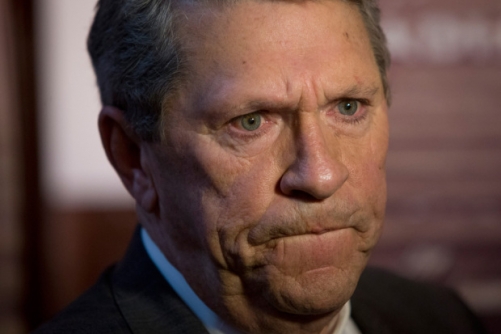 The current head honcho of Canadian Pacific was anointed as FYOUTH’S Villain of 2012. Mr. Harrison (aka The Hunter) has fulfilled the pronouncement of cutting labour and pension expenses at Canadian Pacific. On a related article on this site, the Hunter demonstrates that he has endangered the lives of people and thousands of communities throughout Canada.

The Hunter represents the personification of corporate evils. A corporate elite more interested in his individualistic pursuit of power and fame than the business titan to lead a team or an organization to international dominance.

Hunter Harrison has built a reputation on squashing workers’ rights, disregarding environmental obligations and changing the culture of an historic railway away from its concerns with safety and environmental protections to a myopic focus on profit-maximization.

In 2003 Hunter Harrison announced that he wanted to fire a bunch of employees to increase shareholder value of CN. CN's stock price rose after the mass firings so Hunter kept announcing more and more layoffs. A year later, the number of CN employees dropped significantly.

Under The Hunter, CN abandoned unprofitable rail lines in northern and remote regions of Canada and ignored safety obligations, resulting in numerous deaths and injuries to workers. HUNTER SHRUGGED while CN left a legacy of environmental contamination throughout the Canadian wilderness.

The Hunter's most dastardly deeds occurred when rail workers went on strike to protest CN's blatant violations of its collective bargaining agreement. The Hunter was not concerned with whether the strike by the workers was legal or not, he simply wanted to destroy the union. The Hunter sent scab workers from the United States to fill in for the striking Canadian workers. The government sat still as they watched Hunter illegally introducing scab worker during the labour disputes with no action to stop him.

Hunter Harrison was eventually dumped by CN and recruited by a U.S. hedge fund to run Canadian Pacific – an arch-rival of CN for more than 100 years. The Hunter has been slashing jobs at CP while capitalizing with a major stock market play that will dearly enrich his pocketbook at the expense of livelihoods and lives.

The Hunter received backlash a few months ago over a comment he made at the train derailment site in Inglewood, which is a  small community in Calgary. He called out on the first 90 responders on the scene when he discovered them sitting in their trailer drinking coffee and doughnuts, even though the responders knew the situation was dangerous. He also said the derailment was just "a small incident."

The Hunter has his eyes and targets set while also giving the mainstream media the blind eye. Do not be fooled by the type of man the media portrays him as. He may be reeling in the profits but he is also not recognizing the importance of safety and proper work protocols within the company.

0 Reply to "The Hunter's True Persona"