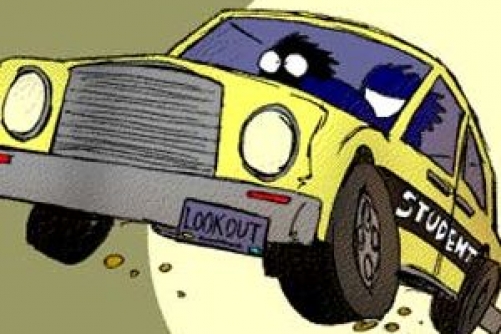 Moms can be wickedly tough some times.  Police in Dover, Delaware have charged 34-year old Tammy Oneal for allowing her 9-year old son to drive himself to school. Tammy O’ says she has allowed her son to drive in a field since he was 5  - with and without a booster seat – because it is important for children to be good drivers.

Motor vehicle accidents are the No. 1 killer of young people in North America so the crazy mom in Dover is not totally off the mark.  Almost every state and provincial government in North America have taken steps in the past few years to reduce the number of fatalities by placing limitations on licenses issued to teen drivers.  A new study issued by the Pacific Institute for Research and Evaluation reports that these new government restrictions have been successful in so far as the rate of fatal crashes among teenage drivers has declined in many U.S. states. For instance, restrictions on teenagers driving at night has resulted in a 13% drop in night time crashes involving 16 and 17 year olds in those states when compared to states that did not have such restrictions.

The most effective graduated driver licensing laws included the following key elements:
•    nighttime driving and passenger restrictions,
•    increase in the minimum age for a learner’s permit;
•    increased waiting period before a driver with a learner’s permit can apply for a provisional license,
•    mandating 50 to 100 hours of supervised driving for obtaining a driver’s license,
•    increase the minimum age for driving to 17
•    zero tolerance for any alcohol use by driver

Restrictions on licensing and driving can only go so far.  You may be able to eliminate most or all fatalities if the speed limit was reduced to 10 mph, but cars and speed are key elements of the social fabric of the 21st Century.  Eventually, the key to reducing automobile fatalities will have to be through improving driver education.  Young people need to know more than the rules and restrictions of the road.  To become a good driver, a teen needs to continually observe and respond – both as a driver and a passenger.  You do not need to start when you are 5 or even when you are 15, but whenever you want to start driving you have to be ready and able to process a huge wave of info.

Keep yourself alive – Think to Drive!

Thu, Dec 22, 2011
Restrictions on licensing and driving can only go so far.
Please send your feedback to editorfyouth.com