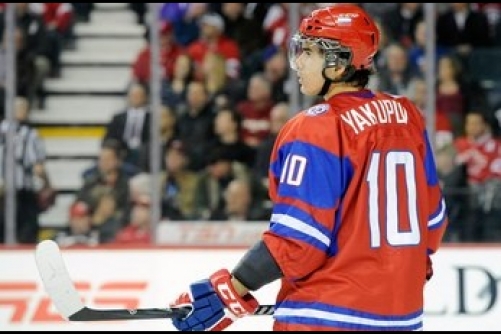 Edmonton Oilers won a lottery and will have first pick overall in the NHL Entry Draft this Friday, June 22, 2012, which will be held this year in Pittsburgh, Pennsylvania.  This is the 3rd consecutive time that Edmonton will have the top pick, but after a dismal 32 regular season wins in 2011-12, the Oilers need help at every position. Left winger Tyler Hall was drafted first overall in 2010 by Edmonton. Centre Ryan Nugent-Hopkins was the Oilers'  overall choice in 2011. Right winger Nail Yakupov of the Sarnia Sting will likely be selected by the Oilers in 2012, but there is a lot of speculation that Edmonton will either trade their pick for a veteran player or for a package of skaters and lower draft picks.

The NHL's Central Scouting Bureau rates Nail Yakupov as the number one prospect among 18 year olds eligible for the 2012 Draft. Yakupov broke Steven Stamkos' previous record for rookie scorers for the Sarnia Sting with 101 points on 49 goals and 52 assists in 2010-11. Stamkos had 92 points with 42 goals and 50 assists in his rookie season with the Sting. Stamkos was the first overall pick in 2008 of the Tampa Bay Lightning. The speedy Yakupov has been compared to the "Russian Rocket" Pavel Bure, a 1989  late round draft choice of the Vancouver Canucks. They both stand 5'11" and 190 lbs. The Russian-born Yakupov will add instant offence and could easily contribute 20 or more goals in his first full season with the Oilers. Hall scored 22 goals his rookie year and Nugent-Hopkins bagged 18 last season.

Ryan Murray is a talented 6'1" defenceman from the Everett Silvertips that can quickly move the puck, quaterback the power play or be a stalwart on the back end for most NHL teams. Edmonton needs help along the blue line so it is possible the Oilers could address that need by picking Murray with the first pick. The Columbus Blue Jackets have the second overall choice and last year’s worst NHL team definitely needs to shore up its defence corp so Murray will probably not slip past the second pick overall.

The Montreal Canadiens are slated to pick third and will likely go with explosive centre Alex Galchenyuk of the Sarnia Sting who was the teammate and buddy of Nail Yakupov for the past two seasons.  Centre Mikhail Grigorenko scored 40 goals and 85 points in 59 games for the Quebec Remparts last year and was the CHL's Rookie of the Year last season.  The highly touted Russian native has recently dropped down on most scouting reports allegedly because of a poor performance in the playoffs.  The 6’3” Grigorenko who was diagnosed with mono after the playoffs appeared relatively sluggish at the end of the season so it is likely that this potential superstar could slip past Les Canadiens.

The New York Islanders will be picking fourth and will be looking for blue line help. The Islanders made centre John Tavares the top pick in the 2009 Entry Draft and the team has surrounded him with a number of decent forwards.  Since this year’s draft is laden with quality young defencemen, the Islanders will likely pick one of Morgan Rielly of the Moose Jaw Warriors, Cody Ceci of the Ottawa 67s, Olli Maatta of the London Knights, Jacob Trouba of USA's U18, Griffin "Big Cat" Reinhart of the Edmonton Oil Kings, Matthew Dumba of the Red Deer Rebels or Derrick Pouliot of the Portland Winterhawks.

With the number five pick, the Toronto Maple Leafs may look for help along the blue line because the Blue and White gave up 264 goals last season, second highest only to the Tampa Bay Lightning's 281 goals allowed.  Toronto’s netminding situation also needs help, but AHL prospect Ben Scrivens was superb in the playoffs and he could make the jump to the NHL next year.  Most scouts are suggesting that the Leafs will pick a centreman such as Galchenyuk or Grigorenko, if available.

Right winger Filip Forsberg is one of the top forward prospects.  Forsberg netted 30 goals and 59 points playing for Leksand of the Swedish Elite League. The 6'2" 188 pounder won gold in the 2012 World Juniors Under 20 group for Sweden, which were played in Calgary, Alberta. Forsberg is the top ranked European player in this year's crop of youngsters eligible for the draft.


Andrei Vasilevski from Russia's Under 20 silver medal team is the top ranked goalie prospect in world. Andrei Vasilevski plays his club hockey with the Ufa juniors, which may hinder him being a top pick in the NHL Entry Draft. Complications tend to arise when NHL teams try to sign players under contract with European teams, especially with Russian kids who are naturally attracted to playing in the Kontinental Hockey League.

This year’s draft will be characterized by the emergence of top-quality and dynamic Russian forwards and a bevy of solid and promising Canadian-born defencemen. The storylines and trade talk this year will be fascinating.