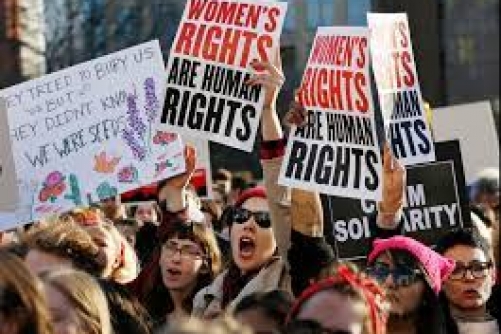 “We hold these truths to be self-evident, that all men are created equal...”

These famous words of the United States Constitution precede the grant by the government of the United States to the right to “Life, Liberty and the pursuit of Happiness”. However, women do not enjoy the same constitutional equality rights as men.  Our generation of women are passionately asking “how could this have happened?” We grew up believing that the constitution, the foundation of America, guaranteed men and women equal rights to life and liberty. We were not told that the Equal Rights Amendment, which was hotly debated in US cities throughout the 1970s, was allowed to lapse and that would mean women would not be entitled to be treated equally in comparison to men.

Women in the USA are viewed as members of society that must contribute equally to the economy and provide benefit to the world. Women own property, vote, receive an education, and they are specially tasked with raising future generations of boys and girls. We want to believe we live in a progressive society where woman are treated equally, however, the recent US Supreme Court decision overturning Roe v Wade highlights the disparity between the sexes.

Although we can view this matter subjectively, statistics do not. Over 70% of all women have experienced sexual harassment; women are systematically disadvantaged within the corporate environment in hiring and promotion standards, which is be highlighted by the fact that women are paid 82 cents to every dollar a man makes. These facts represent just the tip of the iceberg.

Opinions about gender equality may vary depending on upbringing, socioeconomic class and geography. What does not vary is the US Constitution and it fundamentally dictates the laws and rights enjoyed by women throughout the country. Social injustices towards women keep occurring in America because the US constitution offers no guarantee of equality and no right to liberty for women.

It is interesting to note that most constitutional rights are geared towards the benefit of the economy…and to men. Perhaps the only reason women ever received improved rights to equal treatment was because the need to change an arcane law would benefit one or more men. One need only recall the famous Moritz v. Commissioner case fought by Ruth Bader Ginsberg on sex-based discrimination. There was strong hesitation in the court room with passing this law, yet Ginsberg was able to win this monumental case by stating that the current constitution actually discriminated against men who acted as caregivers.

While most countries in the world espouse equality rights for women there have been surprisingly few laws passed in the United States that guarantee women equality. Sure, there is Article VII of the Civil Rights Act of 1964 that aims to protect women from workplace discrimination, but there has been no success in changing the US constitution to improve gender equality. The lack of any progressive change to allow women the right of liberty and choice over their body was clearly a factor for the US Supreme Court deciding in 2022 to delegalize abortions.

Fifty years ago women (and some men as well) were protesting loudly across the Americas in support of equal rights for women.  Since the ERA was being blocked by male dominated legislatures, the US Supreme Court at that time leveraged another aspect of the constitution to support their 1972 decision in Roe v. Wade. The progressive Court chose to interpret the 14th Amendment, which states the following: “No State shall make or enforce any law which shall abridge the privileges or immunities of citizens of the United States” in conjunction with the subsequently added Due Process clause: “nor shall any State deprive any person of life, liberty, or property, without due process of law; nor deny to any person within its jurisdiction the equal protection of the laws”.

By reconstructing the universal right to privacy the United States Supreme Court essentially connected a women’s right to abortion to the constitutional right of privacy. Unfortunately, the decision in Roe v Wade did not provide any constitutional guarantee of equality for women nor did it progress the long-term rights of women to bodily autonomy, but rather the abortion rights provided were based on enforcement of Due Process laws and the general right to protection of privacy.

So why the sudden change? Republicans have been forever against this ruling. Many states had trigger laws in place challenging this law, meaning that they may be immediately enforced if any legal changes are made. Over the years, Republicans have been appointing justices in support of their beliefs, slowly building a group that would vote against the law if the opportunity did arise. In 2018, Mississippi passed a law that went against Roe v Wade stating that abortions are banned after 15 weeks of pregnancy, the ban was challenged by an abortion clinic and the case was brought to the Supreme Court. Finally, they had their opportunity. There was no amendment supporting equal rights of women to fight against them.

Layla, a student at NYU, recently confessed to me that “It is scary living in a country where I know my rights as a woman do not exist. How am I supposed to trust a government that does not operate for the greater good? Once they ban abortions, what’s next?”

Constitutional guarantees of equality are effective at combatting gender-based violence and discrimination around the world. Canada, France, Australia and almost every advanced country in the world has implemented the right of all men and women to equality of treatment within their constitution.  A new amendment to the Constitution of the United States must be made that states that all individuals are equal before and under the law and have the right to the equal protection and benefit of the law without discrimination.

We know that ultimately delegalizing abortions is about control. We are never going to rid the country of sexist individuals, religious zealots or politically powerful voices that would prefer women to continue to be subservient. However, we must propose changes to laws and strive to promote equality wherever possible. Women are currently too dependent on an “incomplete patchwork” of laws that essentially fail to protect our most basic rights to control over our own bodies.

Unfortunately, women in the US have already lost the battle for autonomy over their own bodies. The loss of choice in respect of an abortion may represent the first of many battles for equality rights that our generation must endure. Remember though that American women still have a war to win… we cannot risk losing any more battles as we precariously demand justice in a country that proclaims freedom and equality, but never follows through. That is why every vote counts, we need to give power to those that support women and egalitarianism.

Equality rights will arise from changes in the laws of the United States. To propose an amendment to the Constitution, Congress must have a joint resolution passed by a two-thirds vote or two-thirds of US States must request the amendment by a convention. While it is currently true that the majority of US states are Red, not all Republicans are against providing equality rights for women in the constitution. While only a quarter of the members of the 117th Congress are women, not all Congressmen are opposed to the ERA.

The key is to raise the issue of equality rights for women in every electoral process and then go out and vote for those that promise to make a difference; if we are able to elect more women and supporters of equal rights into the US Congress, women may be able to implement major changes in the treatment accorded to women under the law.

Men and women must fight together for equality!  We must fight for changes that give all men AND WOMEN the right to Life, Liberty and the pursuit of Happiness.