Home » Sports » Norfolk Admirals All Time Best in AHL
back 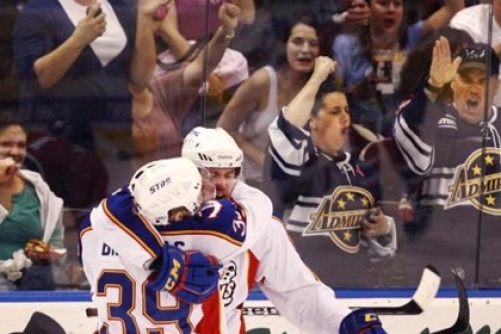 During a successful regular season any double digit winning streak would be looked upon as championship contender and then you have the unknown Norfolk Admirals on a current 21 game roll. Only one win has been by shootout on February 18 and since then 15 straight triumphs in regulation time.

Wow. The Admirals have re written three records: First, the NHL record of 17 held by the 1992-93 Pittsburgh Penguins, then the 2004-05 Philadelphia Phantoms' 18 and the split season 2007 to 2009 record of 18 held by the Syracuse Crunch. The Baltimore Skipjacks of 1984-85 currently hold the record of pure wins with 16 straight. Norfolk has not lost since February 5. The AHL records have been collected for 76 years and the NHL goes back to the 1920s.

The fever pitch around the team has everyone enjoying the moment, since it's unknown when this miraculous opportunity will present itself again. The coaches, players, managers, directors and the fans are sky high as the Admirals propel towards the Eastern Conference title and the overall league Championship before the playoff Calder Cup run. The Admirals are eight points up on the Oklahoma City Barons, who reside in the Western Conference.  Restaurant owners are giving discounts to Norfolk players because of their unbelievable play.

The unsinkable Admirals have an all rookie line which has started and scored 29 goals of the 84 in the past 21 games. Centreman Tyler Johnson, a Spokane, Washington native, has netted 29 and helped on 34 others. Right winger Richard Panik from Slovakia and left winger Ondrej Palat from the Czech Republic both came through again Wednesday, March 28. Palat and Panik each scored a goal and Johnson assisted on both in a 2-0 win over the St.John's IceCaps to keep the streak alive.

Norfolk Coach Jon Cooper shuffled this trio together since the parent club, Tampa Bay Lightning of the NHL made numerous call ups in the past two months.  Eight out of 11 forwards are rookies. The Lightning needs help at every position. An outsider looking in would think its incredible how three youngsters in their early twenties have etched their names in North American pro hockey history.

Tampa GM and Hall of Famer Steve Yzerman is extremely happy with the development of his farm team and looks forward to more winning campaigns in the near future. The all rookie line has signed with the Lightning on three year entry level deals.

Norfolk's leading scorer and second in the AHL is another rookie centreman Cory Conacher. The Burlington, Ontario native has 34 goals and 38 assists in 68 games played. The blue line corps is anchored by all star and alternate captain Mark Barberio. He also conducts the power play and contributed 11 goals and 46 helpers in 67 games.

Captain Mike Angelidis from Unionville, Ontario, has one goal in six games with Tampa. While at Norfolk, the left winger has 14 goals and 13 assists in 54 games. Mike's an undrafted free agent on a one year deal with the Lightning.

The Norfolk scoring is so well balanced with 11 players scoring at least 11 or more goals this season and three scorers in the top seven in the AHL, including centre Trevor Smith with 22 snipes and 40 assists in 58 games played. While with Tampa, Smith scored once and set up three in 15 games.

Right winger Brandon Segal has suited up for 56 games for the Admirals scoring 16 and adding 13. He has played seven games for the Lightning and has yet to record a point. The transition is not always easy. Left winger Pierre Cedric Labrie leads the AHL in plus/minus with a plus 30. In 50 games at Norfolk, Labrie has 13 goals and 20 assists. While at Tampa, he has two assists in 14 games.

Two questions remain unanswered. Can anyone sink the Admirals? When will the streak end?

There are only seven games remaining in the AHL regular season; Friday, March 30 vs St. John's IceCaps, who currently are in second place in the Eastern Conference.

The sixth game will be held on Saturday, April 14 at Binghamton with the final seventh game scheduled for Sunday, April 15 at the Adirondack Phantoms.

0 Reply to "Norfolk Admirals All Time Best in AHL"