The Toronto Raptors are NBA Champions

Home » Sports » The Toronto Raptors are NBA Champions
back 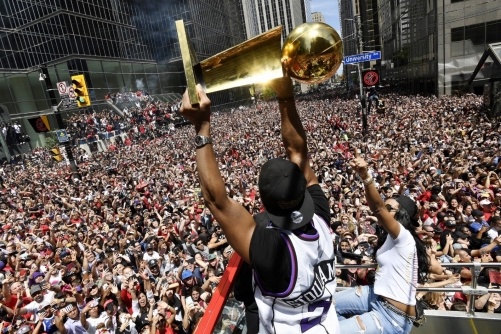 It almost seems bizarre to put it in words, but the Toronto Raptors finally have the coveted title they so desperately craved for so many years. Through the years of torture being subjected to Lebron James’ other worldly talents and the city being dubbed “Lebronto,” this victory was something that the Raptors needed. Witnessing Kawhi Leonard dominate games, Kyle Lowry being a selfless player, Fred VanVleet making impossible three pointers, and the rest of the ensemble coming up big on the biggest stage of all, was definitely a sight to see. However, not only did the Toronto Raptors unite as a team, but the city of Toronto and Canada also united as one.

The Raptors playoff run was a mixture of stress, anger, disappointment, but most of all, excitement. After the Raptors brushed aside the Orlando Magic with a 4-1 series win in the first round, they faced the Philadelphia 76ers. The 76ers are a well-oiled machine with Ben Simmons at Point Guard (PG), Jimmy Butler at Small Forward (SF) and their big man Joel Embiid at Centre (C). The series was a tough one. Each team gaining a game on one another until it was forced to a pivotal game 7. Bill Russel, a former NBA player who played in the 1950s and 1960s and won 11 championships, once said that the best two words in sports were “Game 7” and that “it will make or break you psychologically.” It all came down to this game. With 4.2 seconds left in the 4th quarter and the game tied 90-90, Toronto had a chance to seal the game away. Marc Gasol inbounded to Kawhi Leonard. Leonard ran around to the corner of the court and put up a rainbow shot. After bouncing 4 times on the rim, it finally found its way into the basket. Toronto fans finally witnessed an emotional Kawhi Leonard. The man who is known for keeping his composure was overcome with emotion. What he must have felt at that second is indescribable. Many are referring to this simply as “The Shot” and one of the best shots in Toronto Raptors and NBA playoff history. Many Raptors fans including myself saw this shot as a moment of triumph, but also potential for future success in the next round.

Many believed the next round against the Milwaukee Bucks was already over before it started. Especially when the Raptors went down 0-2 in the series, the majority of the media claimed this series to be over. They believed that the Raptors could not stop the Bucks’ star player Giannis Antetokounmpo. However, the Raptors stunned the basketball world by winning 4 straight games to win the title of Eastern Conference Champions. As the Raptors celebrated their victory, many knew what was in-between the Raptors and their first championship; the juggernaut known as the Golden State Warriors.

The Warriors were in the process of completing a three-peat with winning the championships in 2017 and 2018. They swept the Portland Trail Blazers to win the Western Conference Championship and were waiting for their opponent which ended up being the Toronto Raptors. As the Raptors took the court for Game 1 of the NBA Finals, the crowd at Scotiabank Arena was electric. The Raptors fed off this energy as Pascal Siakam led the way with 32 points to win the game 118-109.

After a close match in Game 2 with Kawhi Leonard scoring a game high 34 points in the 109-104 losing effort, the series moved to the Bay Area. Since the Warriors dynasty began with winning the championship in 2014-2015, their home record in the playoffs was 44-9 (44 wins and 9 losses) before the series with the Raptors; the best record in the NBA today. The Raptors were not deterred from this statistic. After the Game 2 loss, Raptors head coach Nick Nurse addressed his team and told his squad that they needed to get at least one win in Oakland to secure home court advantage again. Kawhi Leonard, known for being quiet and reserved spoke up and responded, “**** that. Let’s get them both.” Kyle Lowry ahead of Game 3 said that “I play better on the road, and I always have. That's how I've always been. The road is where it's supposed to be the toughest, and I love the road.” This mentality permeated through the Raptors locker room. The Raptors took Game 3 with a blowout score of 123-109 and followed that performance with a Game 4 win 105-92.

With a 3-1 series lead heading back to Toronto, Raptors fans could feel how close they really were to their first championship in franchise history. Despite how close they were, there was a sense of nervousness as Game 5 loomed. The two-time back-to-back Finals MVP Kevin Durant was making a return. He had missed much of the playoffs due to a right calf injury. As the game began and Durant took the court it seemed like the superstar was back and better than ever before. In the first 12 minutes of playing Durant shot 60% from the field and 3-3 from the 3-point line. However, he seriously injured himself as he was dribbling the ball and fell to the ground. Later it was revealed that he ruptured his right achilles and would remain out for most or all of the 2019-2020 NBA season. Notwithstanding Durant’s injury, the Raptors lost Game 5 106-105. Winning the championship at home was not meant to be.

Finally, the Raptors were able to capture their first championship in franchise history with a 114-110 win that went down to the final seconds. The Raptors did something that other teams failed to do since the 2014-2015 playoffs; prevent the Warriors from winning at least one game on their home court. The team that was pegged as a massive underdog, was now the champion of the basketball world. Toronto and Canada celebrated as one.

This is not the first time the country has united over sport. The last time there was a major North American sports victory in Canada was in 1993 when the Montreal Canadiens won the Stanley Cup and the Toronto Blue Jays won the World Series for the second straight year. When the Toronto Blue Jays won the World Series in 1992 and 1993, it was the first time a Canadian team won the MLB championship. Despite having the Montreal Expos around, this victory was shared across Canada as it was a victory for Canada over the US, which the latter dominates in the MLB.

There are few times when a country unanimously unites for a reason. Sports is one of the rare occasions where this takes place. Enjoy this win Canada, we earned this.


0 Reply to "The Toronto Raptors are NBA Champions"