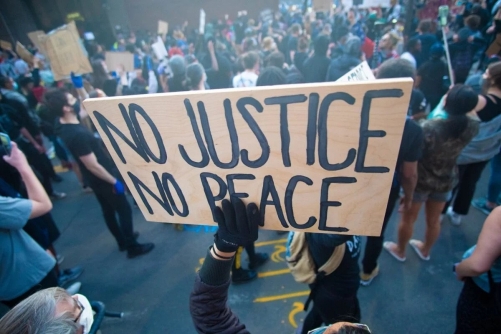 Say their names. These individuals and many more have been injured or killed by police.

The killing of George Floyd from a white Minneapolis police officer, Derek Chauvin has sent an upheaval of protests. Chauvin knelt on Floyd’s neck for almost 9 minutes even after Floyd laid on the ground pleading “I can’t breathe” before shortly passing away.

Floyd’s death has spurred a discussion over police brutality, police racism and police accountability. Some protests were peaceful while others were violent. The voices of anger and frustration from the black community has led to cries to defund the police, dismantle, or abolish it altogether. Minneapolis City Council unanimously passed a resolution to replace the police department with a “community-led public safety system”. In other words, the city disbanded it.  Time will tell whether this bodes well for them.

American courts need to reconsider how they are treating black individuals and suspects by re-examining a legal doctrine that is being overlooked amidst the cries to defund or abolish the police.

What is Qualified Immunity?

Qualified immunity is a legal doctrine that essentially shields government officials and law enforcement from being held personally liable for constitutional violations. In other words, it protects them from facing accountability and being sued in money damages as long as officials did not violate “clearly established” law.

The Civil Rights Act 1871 also numbered as 42 U.S.C s 1983 is a U.S. federal statute that gives American citizens the ability to sue state officials for infringing on their rights such as excessive or police misconduct. This is the legal basis for a federal lawsuit.  According to Congress, “every state official who causes a “deprivation of any rights” guaranteed by the Constitution and laws “shall be liable to the party injured”.

The U.S. Supreme Court in the early beginnings applied this judicial language relatively easily. In Monroe v Pape (1961) the Monroes, who were a black family, sued the Chicago police officers who broke into their homes while they were sleeping without a warrant early one morning and demanded them to stand naked as they ransacked the rest of the place. The officers went on to arrest James Monroe who detained and interrogated him for several hours. The case was significant in that it was the first to apply 42 U.S.C s 1983; a statutory provision from 1871 that recognizes a plaintiff’s ability to be able to sue officers who violated their constitutional rights. The Civil Rights Act 1871 was supposed to provide a remedy for individuals who suffered abuse from a state official’s power including municipal police officers.

Qualified immunity was created in 1967 and it was designed to be the exception for state officials who believed that they had acted in “good faith” and believed their conduct was authorized by law. It was first created in Pierson v Ray of the same year. Qualified immunity became a necessary protective measure for law enforcement because “[a] policeman’s lot is not so unhappy that he must choose between being charged with dereliction of duty if he does not arrest when he had probable cause and being mulcted in damages if he does”.

Why is qualified immunity still being enforced in American law? There are a number of reasons but all of them are misleading. It was designed to protect law enforcement officers from being bankrupted from civil lawsuits. However, this ignores the reality that the individual officer almost never pays out of pocket. That would be city governments or police unions. It was aimed at protecting them from the burden of litigation. Lastly, without this doctrine it would deter law enforcement from doing their jobs effectively. This claim has proven to be invalid. Studies have shown that officers do not even think about the threat of being sued while on the job. The U.S. Supreme Court even amplified this doctrine continuously due to judicial policymaking considerations.

The landmark U.S. Supreme Court case of Harlow v Fitzgerald (1982) formulated a modern approach to the doctrine that is still enforced today. The courts held that “government officials performing discretionary functions, generally are shielded from liability for civil damages insofar as their conduct does not violate clearly established statutory or constitutional rights of which a reasonable person would have known.” Unfortunately, after Harlow the courts have applied the doctrine in three different ways that makes it harder for plaintiffs to successfully win the lawsuit.

Firstly, the plaintiff has to prove to the courts that there is an established judicial decision with substantially similar facts. This becomes problematic for the plaintiff in a litigation lawsuit because they will have a difficult time proving that a violated conduct by a government official or law enforcement was “clearly established”. In other words, a previous case must have the same “specific context” and “particular conduct”. Thus, the plaintiff is highly likely to lose.

Secondly, in Pearson v Callahan (2009) the courts altered the doctrine once again by abandoning a two-step framework in resolving a case causing another major barrier for a plaintiff to overcome. In Saucier v Katz (2001) the courts had to determinate whether there was a violation of a constitutional right and then assess whether the law was clearly established. However, in Pearson the justices reversed course and now can grant the immunity based on clearly established law. All without ever determining if there was a clear constitutional violation. In this instance, U.S. courts are taking a simpler route in ending a case.

Qualified immunity has a lot of problems in its application. Consider a modern example involving racial bias and police brutality in a serious constitutional violation. In 2013, police officers in Texas responded to a call of reports of a black man firing a gun at a mailbox in a residential neighbourhood. When they arrived, he shot at their direction before going into hiding. The officers set up a defensive position and ordered him to come out. After a few minutes, the officers noticed Gabriel Winzer who was mentally impaired escaping on a bicycle and carrying a toy gun.  The officers shot him 17 times. He died at the scene. The officers claimed they feared for their lives. At federal court, the judges concluded that the officers violated Winzer’s constitutional rights by using excessive force when he posed no harm to anyone around him. They were still entitled to qualified immunity because the justices stated that they cannot assess that his right to be free from brutal force was “clearly established”.

This doctrine has become problematic for a number of reasons. Firstly, victims of police brutality have no way in successfully holding officers accountable for conduct that clearly violates their civil rights in a free and democratic society. Due to the lack of accountability, this enables law enforcement to continue to commit such actions whenever they are free to do so in certain situations without ever having the desire to improve their practices and abide by the law. Most notably, individuals from a minority community who are the most likely targets of police misconduct will never be able to obtain justice.

Secondly, not only does this legal defence reduces a person’s ability to achieve victory in a civil suit but many claims will never make it in court due to the fact that attorneys will never be able to recover the fees lost for the time they dedicated in a civil rights violation in cases involving police brutality.

Qualified immunity also freezes constitutional law. Instead of courts applying, reviewing, and analyzing whether a defendant’s conduct violated a constitutional doctrine, the judges take an easy shortcut and declare that there has been no similar case in the past. Thus, dismissing a plaintiff’s claim relatively quickly. Overall, courts are rarely resolving constitutional issues.

With the recent increase in police killings of unarmed black individuals and the death of George Floyd that has created a wave of massive protests the time is now for U.S. courts to seriously reconsider the defects of the doctrine and abandon it altogether. However, just recently the U.S. Supreme Court announced that they will not revisit the doctrine and left it for Congress.

It is no surprise that in these current times with the global impact of the Black Lives Matter movement that abandoning qualified immunity as a structural core feature in the American criminal justice system would be one of the most vital steps in achieving justice and peace. Law enforcement should not be shielded from constitutional violations because granting them this in civil suits tells the public that police are above the law.