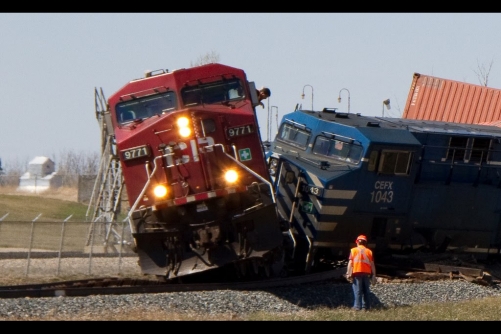 I work as a Rail Traffic Controller for Canadian Pacific in Calgary. We hear a lot in the news these days about rail safety and derailments. But what the general public doesn’t know about, and has never been reported is the shortage of workers needed to handle dangerous commodities.

Hunter Harrison, despite the awards and recognition for turning CP around and showing the most profitable year in the company’s history has also created a work place culture based on fear.  Everyone from the VPs down to 1st level supervisors and managers are scared for their jobs. So when the VP tells the GM to do something; the managers and supervisors beneath them will do it, even if it is morally wrong.  All to save a buck.

Personally I think Hunter Harrison should feel disgraced, as he can’t seem to legitimately run a successful company without intimidating employees.   It’s no wonder that CP is reporting more profit.  Make the employees scared so they’ll work twice the hours without breaks or lunches for the same pay. Sounds like something you would hear out of a slave shop in a third world country.

To keep the shareholders impressed by the numbers and operating ratio, CP's management keeps cutting jobs.  Even Safety Critical positions such as mine are being cut so tasks are being doubled up and tripled up.  It’s gotten to the point that many days, I’m unable to perform all the work that is expected of me, and I’m not the only one. The managers say take a break, go to the bathroom, BUT get all of your work done, and if not, you’re suspended.

I would like to think that there must be some type of limit or restriction as to how much workload can be expected from the staff, especially in safety critical positions.  After all, these trains are being guided through all of our communities with chemicals and poisons, toxic to mankind and the environment by people who don’t have the time to do their jobs safely or properly.  The people who are dizzy and light headed because they haven’t had anything to eat, and haven’t been able to move from their chair in over 8 hours day after day are the same people who are skipping or forgetting steps and safety procedures. Overworked employees are struggling to keep up to the outrageous demands placed on them by their employer.

I think the general public should care about this because the ultimate issue is safety. Safety to public lives and the environment. Please see through the nonsense in the media stating how well CP is performing. Disregard the accolades given to its president Hunter Harrison. He's a master of illusion. He's got the market's duped, and the hedge fund managers have not been able to figure this out.

At CP staff are complaining and quitting at rates never seen before. The company has strangely responded to the current staffing shortage by adding more work to the over-worked safety controllers. If I wasn't one of the over-worked controllers, I would not be laughing at the irony.

Manipulating the stock prices with questionable accounting metrics is one thing, but when corporations cut safety critical jobs they are placing a price tag on human lives. How comfortable would you be if your city had half the number of policemen, fire fighter, or air traffic controllers? We have nearly half the safety controllers that were employed last year and that number continues to decline.  We all know that this state of affairs is not a safe or sustainable situation. I fear that I will be saying, “I told you so” when we hear of the next completely avoidable tragedy on the news.

By: Mark, an over-worked safety controller