Don't be Hating on the Homos! 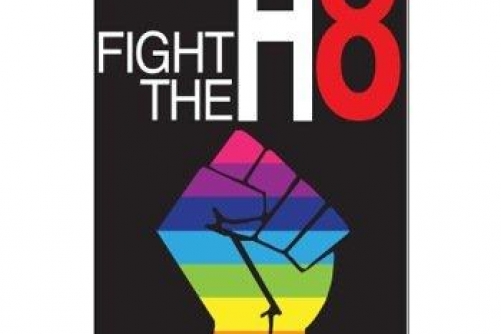 Same-sex marriage has always been a controversial trigger point.  This year, though, seems to be off to an exceptionally acrimonious start for the gay community.

In Australia, the ancient but respected Margaret Court – she was one of the greatest tennis stars of the 20th Century and a major stadium bears her name - hated upon homosexual couples with the following gem:

“To dismantle this sole definition of marriage and try to legitimize what God calls abominable sexual practices that include sodomy, reveals our ignorance as to the ills that come when society is forced to accept law that violates their very own God-given nature of what is right and what is wrong.”

In the U.S., the past decade has been characterized by reams of protests and fiercely competing legal actions and ballot initiatives to legalize or ban homosexual weddings.  Protests against same sex marriage are fostering a culture of hate in cities and towns across the United States.  Bible thumpers and Jesus lovers were often on different sides of the issues causing rifts within religious groups.

Washington, D.C., Connecticut, Iowa, Massachusetts, New Hampshire and Vermont currently issue marriage licenses to same-sex couples.  In June 2011,  New York lawmakers agreed to legalize same-sex marriage, which made New York the largest state where gay and lesbian couples are able to wed.  A kerfuffle followed New York's approval of same-sex marriage and gay rights advocates have had to respond to a slew of discriminatory statements and legal challenges over the past year.

The plight of gay couples took a turn for the worse recently in Canada.  While Canada became one of the first nations in the world to formally legalize gay marriage, the current Harper government has challenged the legality of same-sex weddings.   The reversal of government policy was discovered during the hearing of a divorce action.  Apparently, the Canadian government was taking the position that many, if not all, the unions involving foreign residents are invalid because non-resident homosexual couples were never really married under Canadian law.

The Canadian government's position has prompted sharp questions about why so many foreign same-sex couples were allowed to get married for so long before deciding the unions were not valid. Around 7,500 same-sex couples have married in Canada since 2003 with 2,500 or so couples moving to Canada from foreign lands and U.S. states that do not recognize gay unions. The discovery of Canada's change of policy occurred in a divorce action involving a lesbian couple - one woman from England and the other woman from Florida, USA - and it will be interesting to see if the Toronto judge hearing the case on February 27, 2012 will uphold the gay couple's 2005 marriage or side with the position of the Canadian government.

FYOUTH suspects that the right-of-center Conservative government led by Prime Minister Stephen Harper has a hidden agenda.  While Justice Minister Rob Nicholson publicly states that he is "looking at options to clarify the law so that marriages performed in Canada can be undone in Canada," the Conservative government has in the past opposed same-sex marriages and they have had plenty of time to clarify the law. Instead of having a public discussion about gay rights, the Department of Justice covertly argues that same-sex marriages that had already taken place could not be ended in Canada.

Former Toronto mayor David Miller said that the Harper government had embarrassed Canada in front of the world by upsetting the lives of same-sex couples who flocked to the city for marriages they were denied in their home countries. “I was so proud to be the mayor of a city that had the first same sex marriages,” Mr. Miller said. “It made a strong statement that everybody is welcome in our country.”

Proponents of same-sex marriage have long argued that the institution of marriage is a unique expression of love and commitment and that calling the unions of same-sex couples anything else is a form of second-class citizenship and that there also quite a few legal and financial benefits tied to marriage. Those opposed to same-sex marriage typically argue that allowing same-sex couples to marry would undermine the institution of marriage itself.  In 2012, people that wish to challenge the notion of same-sex marriages should avoid harping upon language that is blatantly offensive to gays. Court's reference to "abominable sexual practices" and her suggestion that God is on her side constitutes an attack upon the homosexual community.  Let us avoid the rhetoric of hate.