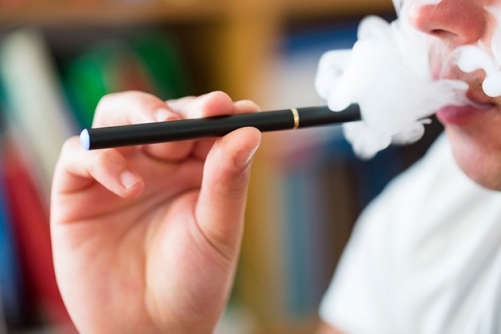 The electronic cigarette is a relatively new product that was created by Hon Lik of Hong Kong in 2003 as a smoking alternative.  This product was introduced in North America in 2006 and ever since its creation the concept has caught on like wildfire, either being used to help quit smoking, as a less toxic substitute, or as a fashion accessory. Ranging anywhere from $12- $200 per unit, sales are expected to each $10 billion by 2017.

The cigarette has a simple design, looking very much like a real cigarette but instead has a battery attached to a chamber filled with flavoured liquid.

Only those cigarette juices that actually contain nicotine are officially not permitted for sale in Canada, but its regulation has been very inconsistent.

The e-cigarettes prominent alternative to regular cigarettes has stirred up tons of controversy. The ‘banned’ nicotine versions of the e-cigarette have only four ingredients. These include water, propylene glycol, vegetable glycerin, nicotine, and flavor, compared to the 4000 chemicals a normal cigarette contains. Health Canada refuses to acknowledge the benefits and the electronic cigarette has been sitting in a legal grey. The product is not banned but not yet approved. The Electronic Cigarette Trade Association of Canada is working on getting the merchandise sold in Canada without being classified as a Tobacco product.

By contract, electronic cigarettes remain easily accessible in the United States, but the government requires health warnings under new regulation by the food and drug administration and has banned the sale to children. The ingredients must also be clearly listed on the package.

These devices appear to be a healthier alternative to their cancer causing counter parts, however the governing bodies of Canada are putting up a reasonable fight to ensure their potential is not fully recognized. This may seem unjust but with its consumption deemed less harsh, the sweet candy-like flavours and low regulations, usage may turn into either another nicotine addiction or a potential gateway towards the traditional cigarette. There has been controversy surrounding a large increase in calls to United States poison control centers regarding e-cigarettes, rising from 1 a month in 2010 to 215 a month in 2014.

The e-cigarette has begun to renormalize smoking, making this less of a taboo, which goes against everything that Health Canada has worked so hard to achieve in the past few decades. There is also no confirmation on the long-term effects of constant inhalation of propylene glycol, the key component of the e-cigarettes.

Health Canada’s last public statement regarding e-cigarettes occurred in 2009. Canadians should know if these devices are safe or not. Are they a good method to help smokers quit, or are they a way to normalize smoking yet again?

By: Cassandra Beyfuss, Toronto, ON

0 Reply to "E-Cigarettes: Friend or Foe?"