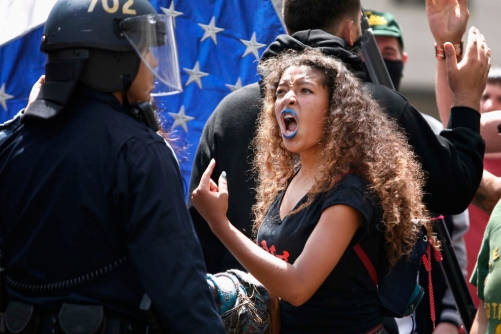 On May 1st, 2012 May Day was commemorated around the globe with political protests and demonstrations by organized labor, or also known as the 99%. The Occupy Wall Street Movement, which formed last year in New York, used the day to spread its message of social and economic inequality that continues to hinder sustainable means of existence for the vast majority of the population.

Also known as International Workers Day, May 1 is marked in different ways around the world, and in may countries May Day is observed as a national holiday. This celebration of the international labor movement stemmed from a deadly 1886 labor demonstration in Chicago calling for an eight-hour workday.

On May Day 2012, the international working class is confronting an unprecedented crisis of the world capitalist system. Workers around the world are beginning to enter struggles that pose the need for a revolutionary transformation of society.

According to a new report by the United Nation’s International Labor Organization, more than 50 million jobs around the world have disappeared since 2008. Warning that the “global job crisis has entered a new, more structural phase,” the ILO predicted that the ranks of the jobless would reach 202 million this year and rise to 210 million by 2016. On average, more than 36 percent of job-seekers in advanced economies have been without work for more than one year.

Pointing to the grim prospects for the next generation of workers—including the college-educated students with little or no hopes for a job, let enough one that pays a living wage—the ILO warned of the danger internationally of increased “social strife” and “riots.”

In addition to this staggering level of social inequality, the breakdown of the capitalist profit system is once again leading to a mad scramble between the US and other countries for control of world markets, raw materials and spheres of influence. Since the collapse of the Soviet Union, the US has sought to use military preponderance to offset its economic decline and take control of the most geo-strategic areas of the world.

That is what is behind the wars in the oil-rich regions of the Middle East and Central Asia, and the plans for new wars against Syria, Iran and ultimately Russia and China. At the same time, old European powers are asserting their own imperialist interests in their former African and Middle Eastern colonies. Like the years leading up to World War I and World War II, the stage is being set for a global conflagration, this time with nuclear weapons, that threatens the very survival of mankind.

The immense problems of modern society—the growth of poverty and disease, global warming and environmental threats, the provision of housing, health care, nutrition and education to more than seven billion people on the planet—require a collective response and ever-greater planning and cooperation. But under capitalism the rational allocation of resources is impossible because all economic decisions are subordinated to the profit interests of a tiny minority.

The claim—repeated by every capitalist politician—that there are not enough resources to meet society’s needs, is a contemptible lie. A recent report on so-called Ultra-High Net Worth Individuals—those with a total worth of $30 million or more—revealed that their combined fortunes have now surpassed $26 trillion. In other words, some 186,000 people (.002 percent of the world’s population) have amassed wealth equal to nearly half of all the goods and services produced around the world each year!

The systematic redistribution of wealth from the majority to the wealthy elite, which has accelerated since 2008, has produced widespread anger. After decades in which the media pundits, academic dunderheads and demoralized former leftists declared an end of the class struggle, 2011 saw the reemergence of the massive social upheavals on a world scale.

What is needed is an international strategy to unite workers throughout the world to replace the profit system with socialism. Only in this way can workers achieve genuine social equality, peace and the democratic control of the economy.