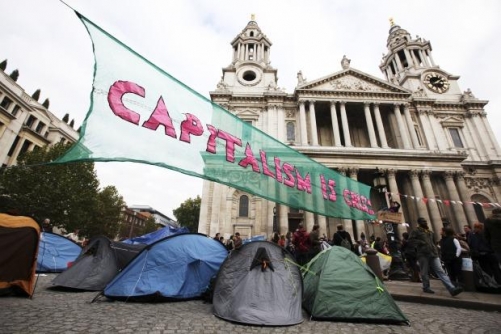 Between 50 and 100 people moved into Paternoster Square with tents and supplies from around 19:00 BST on Tuesday May 1st to further the world-wide mobilization of the masses for MAY DAY!

But they were forced to leave by City of London officers just hours later.

Campaign group Occupy London said it had set up tents following May Day demonstrations in the capital.

It comes more than six months after members of Occupy London were prevented from occupying the square in heart of the City of London so pitched tents outside St Paul's Cathedral.

In February, police and bailiffs evicted the protesters, who oppose corporate greed, from the tent city they had set up around the cathedral after they lost a High Court case against the City of London Corporation.

But Tuesday evening's demonstration was much more short-lived despite Occupy saying that protesters had "fulfilled" a goal.

"This was something we have wanted to do on 15 October and we have finally done it," a campaign group spokesman said.

"This is a force that will not be stopped."

Occupy London – part of the global movement for social and economic justice – today highlighted the corporate greed endemic in the UK and called for a change within society.

It was reported today that more than 20 arrests have been made after anti-capitalist (and rather pissed off) protestors attempted to ‘occupy’ a building near Piccadilly Circus in central London. The good news is that there were all present in large numbers. Some 60 Occupy London Stock Exchange (OLSX) protesters tries to get into Panton House on Panton Street.

Occupy London has been at the forefront of the worldwide “OCCUPY’ movement as on October 12 2011 a campaign was launched on Facebook for protestors to take place at the London Stock Exchange on 15 October in solidarity with the Occupy Wall Street protests in New York and with multiple other protests planned worldwide for that day.

“We refuse to stand by and let this happen. We call on others to join us in the fight for a more just society. Today we have taken this to one of the offices of the 1 per cent. This is only the beginning. Come and join us on 15th December for Occupy Everywhere.” – chanted the protestors. Occupy London will unveil details of Occupy Everywhere soon. Be ready.

Until than the question remains…do YOU consider such protests to be ‘disturbing the peace?’

Ask yourselves whether such arrests are really helping the underlying cause and message that is the foundation of the OCCUPY movement.