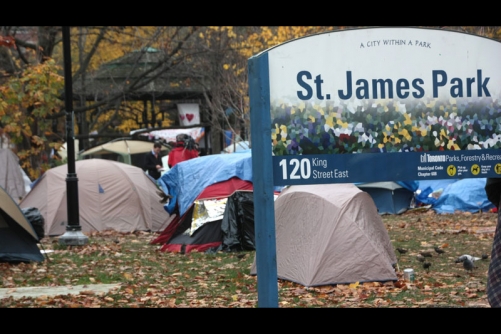 TORONTO - It wasn’t quite St. James Park, but some Occupy Toronto protesters tried to keep May Day momentum going on Wednesday (May 2) morning, with Barrick Gold Corp. as their target.

About 30 of the most ardent protesters gathered in Simcoe Park near Front and John Sts. early Wednesday after spending the night there.

The location was chosen because Barrick’s annual general meeting was held across the street at the Metro Convention Center starting at 10 a.m.

Occupy Toronto put Barrick Gold Corp. in its cross-hairs claiming the company only cares about corporate greed — not the environment.

“The privileges enjoyed by mining companies are some of the worst handed out to the global 1%,” said Ben Hirsch, an organizer with Occupy Toronto.

Occupy Toronto are making sure their demands to police are heard loud and clear.

Some 75 demonstrators marched from 52 Division on Dundas St. W. to police headquarters, Friday April 6, to protest recent violence against protesters.

This comes one week after six protesters were jailed, stemming from an eviction notice for Occupiers to remove tents behind Osgoode Hall.

Outside police headquarters, three people laid down on the ground while others drew chalk outlines around them under the watchful eyes of 25 officers, who held a bicycle barricade to the entrance.

The protesters have four demands: release the outstanding two protesters from jail; drop all charges and launch a public inquiry on whether police used excessive force in the arrests.

An Occupy Toronto protester was arrested for causing a disturbance following a brief rally at Yonge and Dundas on Tuesday April 17, 2012.

The man was taken into custody after police say he began swearing, prompting members of the public to complain.

The re-occupation will begin on Tuesday May 1, 2012, after the conclusion of the May Day march and cultural event at Alexandra Park (Spadina Avenue and Dundas Avenue West at 9:00 pm.

The downtown Toronto park that once served as the base camp for the month-long Occupy protest is getting a free facelift courtesy of dozens of volunteers with landscaping and sodding firms.  Contrary to the bad impressions presented by the mainstream press, volunteers, activists and workers are joining forces to restore the downtrodden, patchy and muddy lawn of St. James Park at no cost to the City of Toronto or to taxpayers.

City officials had estimated it could cost up to $60,000 to repair the damage caused during the 39-day occupation, which saw protesters pitch tents and build fires in the park. Kyle Tobin, one of the project's organizers, says it's important to get the work done before the ground freezes so that the lawn will be back to its former glory in the spring.

Now if only Canadian governments would move as quickly to help the downtrodden and unemployed youth of Toronto.

Occupy Toronto seems to be struggling to maintain an active site in Canada’s largest city.  On November 21, the protesters were served with at least their second legal eviction notice and ordered to end their 38-day encampment at St. James Park in downtown Toronto.  There was a huge turnout for the lively protest that marched from St James Park to Toronto City Hall on November 22.  Supporters from OCAP and G-20 joined forces with Occupy Toronto activists carrying insightful placards with the largest banner shouting: STOP THE REPRESSION!  Some protesters are now camping out at Queen’s Park, which is the huge public park across from the provincial legislature.

Surreal would be how an observer may wish to characterize the past few days of the dismantling of the Occupy Toronto camp at St. James Park.  The impressive medical yurt structure that was donated by local supporters and several other tents have been removed, however, there remain about a dozen peaceful protesters that continue to stay overnight in the park seemingly willing to be arrested by Toronto police authorities.  The excruciatingly slow-paced dismantling of the tents is typically accompanied by rhythmic drums and soulful music.  Unlike the police brutality that has characterized the end of occupations in the U.S. and other parts of the world, the Toronto police are commingling with the activists and police are waiting patiently for the individuals to comply with the legal eviction notices.  Confrontations and arrests in Toronto have been nominal – it seems to have become the quintessential Canadian protest movement!

Fri, Dec 30, 2011
Volunteers cleaned up the site so that taxpayers would not be left with the bill. There is widespread support for Occupy protesters because youth unemployment and economic inequalities in Canada and the US are on the rise..

Wed, Nov 30, 2011
Occupy Toronto seemed like it did not create any after effect. Also, seems like no form of protest seem to change anything in our system. Reminds me of G20 despite public opinion, we've spent over 800 million dollars. And now mayor is singing boring tax money that we are going to spend cleaning up the mess. Where were you when we spent that money in G20. What did we get?
Please send your feedback to editorfyouth.com