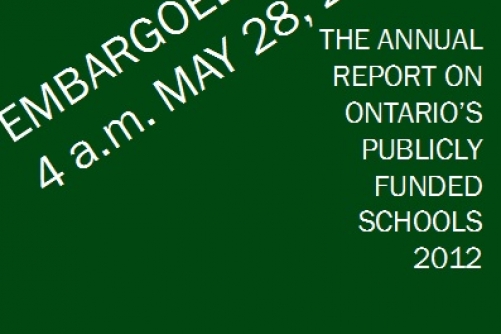 Ontario schools should improve the way it serves special-needs students, according to a new report, by conducting a wide-ranging review of services and devising a better policy to support connections between schools and their wider communities at a time of falling enrolment.

The annual report by People for Education released on Monday May 28th, 2012 expresses dismay at the inability of the system to deal properly with students with special needs.

"We were shocked to find that, in many schools, there are caps on the number of students who can be assessed," the report states.

About half of all schools cap the number of students who can be assessed for each year, with about 35,000 students on waiting lists for special-ed services -- a substantial decline from a decade ago.

While the percentage of elementary students receiving special-ed assistance has climbed substantially in the past dozen years from 11 to 18 per cent, student teacher ratios have jumped from 22 students per teacher to 36, the report states.

The report finds Ontario lags behind other provinces, which have comprehensive policies and dedicated funding to support school links to community services such as childcare, employment, libraries and recreation programs, as well as to mental and medical-health services.

"Ontario schools are mainly left to their own devices to do this vital work," the report says. "Few schools have community-liaison staff."

Those schools that do have a dedicated community-liaison person allot little time to the role, the report says.

Based on responses from more than 1,000 elementary and secondary-school principals from across the province, the report notes overall elementary enrolment has fallen 13 per cent and secondary enrolment 10 per cent since 1998, yet most funding remains tied to student numbers.
As of April 2014, many elementary and high school principals have called out on parents to keep their child at home since the lack of funding for special needs students have been decreasing over the last few months.

As a result, about 125 schools are slated to close over the next three years and another 142 are under review for closure amid a provincial push for boards to close under-utilized or small schools.

The Toronto-area alone would need to close 140 schools to bring its board in line with expected provincial utilization rates, according to the report.

Given the tie to funding, declining enrollment affects specialized programs and extracurricular activities, may result in fewer school staff, and can lead to more multi-grade classes.

Only half of elementary schools across the province now have a teacher-librarian, down sharply from 80 per cent 1998, with northern Ontario having proportionately the lowest number, the report says.

Among its recommendations, People for Education urges the province to develop "a more effective, less divisive and less taxing method" for making decisions on school closings than is currently in place.