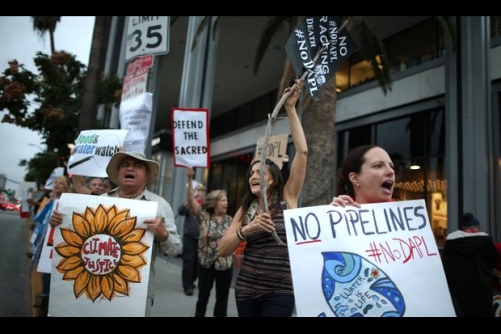 Costa Rica has successfully gone 150 days this year on renewable energy entirely. Norway is phasing out all sales of gas and diesel cars by 2025. Over twelve countries have strictly banned the use of plastic bags.  Against the backdrop of an increasingly eco-friendly global community, the United States is in the midst of constructing the Dakota Access Pipeline, a 1,172 mile pipeline project designed to transfer 470,000 barrels of crude oil daily.

Big Oil and various American governments have bypassed green energy policies in favour of possible environmental degradation while blatantly trespassing upon the rights and land of the indigenous tribe, the Standing Rock Sioux.

The Dakota Access Pipeline is a four state project running through North Dakota to Illinois and will be built outside, but near, the land owned by the Standing Rock Sioux Tribe. Protests have broken out in the past few months due to the tribe arguing that the construction of the pipeline would affect the water quality of thousands as well as impede on spiritually significant sites.  Some of these important sites were reclaimed by state governments that opted not to uphold historical treaties with Native Americans.

In an evident effort to fast track the environmental assessment process, the treaty rights of the indigenous peoples were overlooked. Protests have broken out all over North America.  Headlines have referred to the brutal treatment of protesters, where private security officers released vicious dogs and sprayed copious amounts of pepper spray onto peaceful protesters.

The CEO of the Energy Transfer Company that is making huge profits from the $3.8 billion mega-project has stated that the corporation is committed to finishing the Dakota Access Pipeline despite the roaring opposition against the project.

Political figures, such as Jill Stein and Bernie Sanders, have come out to show their support for ending the exploitation of Native American people and arguing that Americans should respect Native American rights.  The Standing Rock Sioux Tribe are moving forward with additional lawsuits to save their rights and their water.  They have successfully raised awareness of this injustice, and the pipeline’s progress towards completion has identified a corrupt system that is in need of drastic transformation.

The misalignment of the Dakota Access pipeline with a green economy impacts the future of energy in the world.  The United States does not need more oil and harmful carbon emissions nor does it need more pipelines that costs billions to build.  While the world is undergoing a transformation in the global energy system and is moving away from oil and carbon emissions, the leaders in the U.S. are eschewing a clean environmental policy in favour of a corporate creed that prioritizes profits over green energy.

Presidential candidates Clinton and Trump remain silent on the Dakota Access pipeline environmental issues. The voices of the protesters, though, continue to resound with young people everywhere. Young people that want America to be great again are demanding more accountability and moral leadership from their political representatives. The upcoming election is an opportunity to express yourself with a vote for candidates that respect Native American rights and demonstrate a commitment towards environmental improvement.