VILLAIN OF THE MONTH - Carlos Slim

Home » Op-Ed » VILLAIN OF THE MONTH - Carlos Slim
back 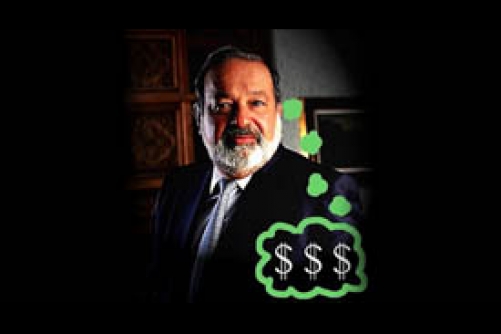 Over seven billion people occupy this world, but not one person has more money than megabillionaire Carlos Slim. The world's richest man – Fatcat Slim brings $69 billion net worth – is FYOUTH's Villian of the Month because his stacks of money are piled on the backs of traveling young people.

Carlos Slim Hela is chairman and chief executive of Mexico's telecommunications companies Telmex and America Movil. América Móvil accounted for over US$50 billion of the wealth of this Mexican businessman from parents of Lebanese descent. Huge profits are derived from the astronomical rates Fatcat Slim charges to Canadians and Americans that use their cell phones in Mexico. Mexico's telecoms typically add a surcharge of $1.00 per minute for roaming but the real profit involves data transfers on an iPhone or Blackberry that typically cost $5.5+ per MB, which means sending email attachments or uploading a photo to Facebook cost over $10 each.

Commerce in Mexico is far from transparent and no one can work the murky waters like Fatcat Slim. The problem is that as his adopted country flounders as a result of widespread corruption and a vicious drug war, Mr. Slim presents the aura of a modern-day Ceaser standing separate and apart from the plebians over which he rules. Slim has become the world's richest man – Fatcat Numero Uno – while the plight of the poor in Mexico is worsening.

0 Reply to "VILLAIN OF THE MONTH - Carlos Slim"