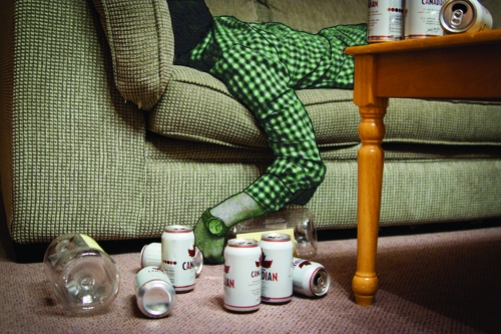 The obituary read Christopher Skinner, age 17, who died of acute alcohol poisoning on June 6, 2010, was loved by his classmates and family. Chris was a popular Grade 11 student at Waterdown High School and although underage, Chris was no stranger to drinking. At a house party one day, Chris consumed a 26-ounce bottle of rye, two or three beers, marijuana and chugged a pint-sized glass of screech before passing out. Chris Skinner tragically never woke up from his comatose sleep.

Chris Skinner's death from acute alcohol poisoning reveals the rise of a disturbing practice. Chris was partying with his buddy Kyle and openly consuming alcohol with Kyle's parents. The parents accepted their use of marijuana and alcohol as long as the boys partied at home.

The facts of the Chris Skinner case indicate that parents will sometimes participate in the pranks and partying involving their children. It was a family party tradition to mark up the first party-goer who passed out in the house. Chris' pals took out markers and wrote profanities on his arms and legs. The mother of Chris' buddy even wrote the words "left" and "right" on the soles of Skinner's feet. The group placed CD cases on the comatose youth's head and duct-taped his ankles together while the mom took photographs with her cell phone with the intention of placing the photos to FaceBook. At the coroner's inquiry, it was discovered that the mom's iPod Touch contained photos of another "friend" that had passed out and marked up on her living room floor after a Halloween party.

Surely, parents should not participate or even tolerate underage drinking and partying binges. FYOUTH is aware of quite a few families that often indulge in the occasional glass of wine or beer with underage kids within the home, and although this is a technical breach of the law, who really cares to interfere in such cases? However, Skinner's death and the anecdotal evidence suggests that may be a slippery slope when it comes to alcohol use by minors. Let's hear what you think about the issue of alcohol abuse and whether governments should hold parents liable for minors that are knowingly allowed to consume drugs and alcohol?